Reviews are continually rolling in for our new game, Orphan Black: The Card Game. This one is from a reviewer on the boardgamegeek website. He loved the game and gave it a solid 8/10. Here are a few things he mentioned:

The game itself is really quite unusual but fun with several mechanics used in it.

I really enjoy the deduction and hidden roles aspect of the game.

Thanks for the review Jonathan Nelson!

We like to think we playtest the heck out of our games. We live in different cities so we have multiple groups across the country already playtesting our games, but we’d like even more!

We are always looking for more people to playtest our games, but realize that not everyone that wants to playtests live close to either Sen or I! So now we’ve set up a quick survey for those that are interested in playtesting with your own group. You can sign up for Print and Play playtests – which means you’re comfortable printing your own set of components and cards, and testing, or you can sign up to have prototypes mailed to you.

If you are interested, please complete this quick survey! Thanks for taking an interest in making our games better!!

–Powers (based on the hit comic by Brian Michael Bendis) – a 2-5 player 1 vs. many game in which 1 super powered villain moves around the city committing crimes while the others play as detectives trying to capture the super villain

–Skirmishes – a 2 player combat game with very Euro mechanics. This game is designed by Jay and another designer, Shad!

–Law of the Jungle – a 2-5 player family game about getting more animals than the other players, while avoiding the animal that will be removed at the end of the game

–9 Thieves – a 2-5 player game about betting on which thief will avoid the guards and steal the most money by the end of the night.

-More top secret games that are in the works – some with licenses.

Here we go people! Our new game, Godfather: A New Don has a press release! With it we’re unveiling the box art – which is pretty spiffy. Even spiffier is the board art, done by map artist extraordinaire, Ron Guyatt! Check that out below the press release.

Here’s more of an overview of a new game/book called The Infinite Board Game. It’s a re-release of the Piecepack system, which is a specific set of components that can be used to play…well…an infinite amount of board games. I created a game with a friend of mine, Don Kirkby and we submitted it for inclusion in the book – and it was chosen! Our game is called Cream of the Crop and the rules for it can be found under the FREE GAMES tab here on this site!

In the meantime – here’s Tom Vasel’s overview of the whole thing. While it’s not his cup of tea, he does think that it will tickle many people’s fancy!

Joel Eddy from Drive Thru Reviews has posted a video review of our new game, Orphan Black: The Card Game – and he loved it! This game has had a very slow launch, but with Tom Vasel giving it the Dice Tower Approved stamp and now Drive Thru giving it a positive review – here’s hoping the game gets onto more gamers’ tables!

A few of the things that stood out for me in the review:

“We have had a ball with this game!”

“It’s got an interesting way of approaching social deduction. It feels like a Werewolf or Resistance style of game but with a little bit more to it.”

“If you like the show, I think you’ll really get a kick out of this. I would get this if you’re a big fan of the show.”

“I would recommend this across the board, regardless if you’ve seen the show.” 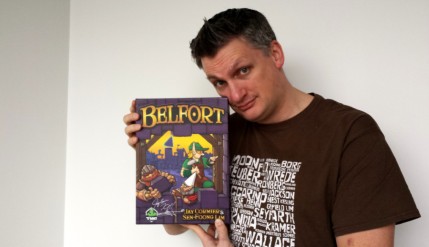 Daniel Chai from the VanCity Buzz wrote an article about the board game scene in Vancouver. They talked to Starlit Citadel and Shanon, who runs the Terminal City Tabletop Convention (coincidentally happening this weekend!) and they talked to little old me! We chatted about game design and how I stay motivated. You can check it out here!