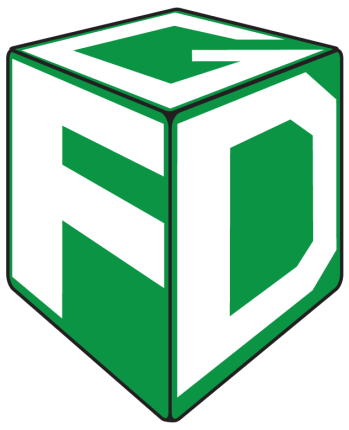 Some of you may wonder if all we do is design games. Well, no. I try to give back to the community and grow the audience by teaching new gamers how to play the so-called “gateway games” and by teaching experienced gamers how to play some of the latest and greatest games. Along with some of my friends, we host the free-for-all London Family Game Days twice a year, conveniently timed after Alan R. Moon’s “Gathering of Friends” and Essen so that we can attend those events and bring back some goodies for the fine people of London to partake in.

Here’s a quick video from our local public news station covering the event:

Thanks to all of our FLGS sponsors
-GeekStop Games
-Ubercool Stuff
-L.A. Mood Comics & Games

Thanks to our community partner, Victoria Public School, for providing the space and the food.

And thanks, especially, to our cadre of tireless volunteer instructors without whom the day would not go at all! 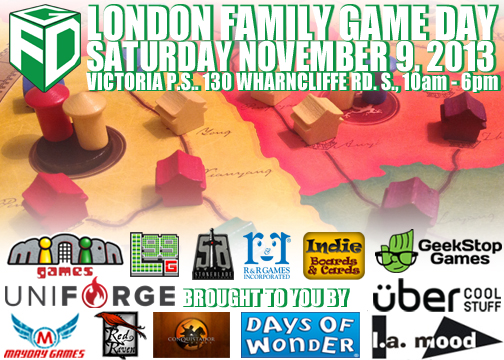 Here are some pics from the event: 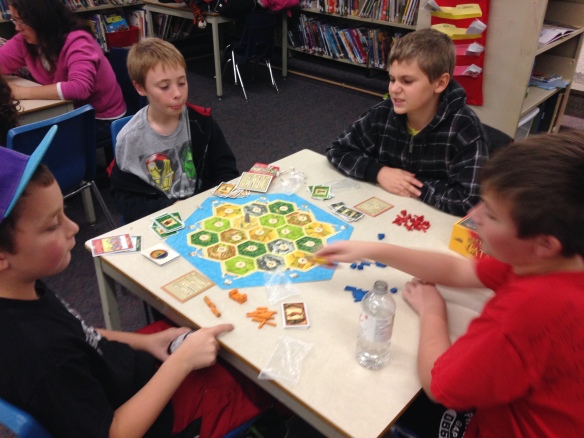 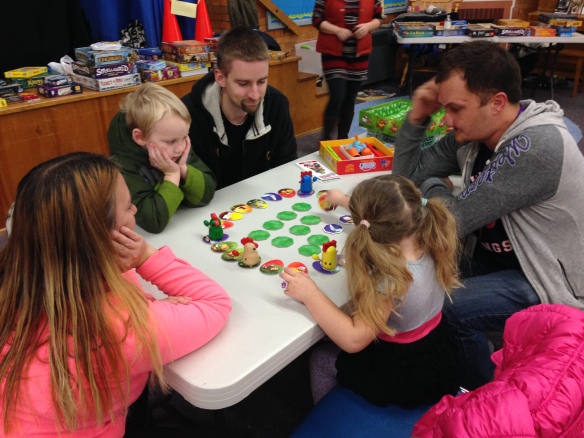 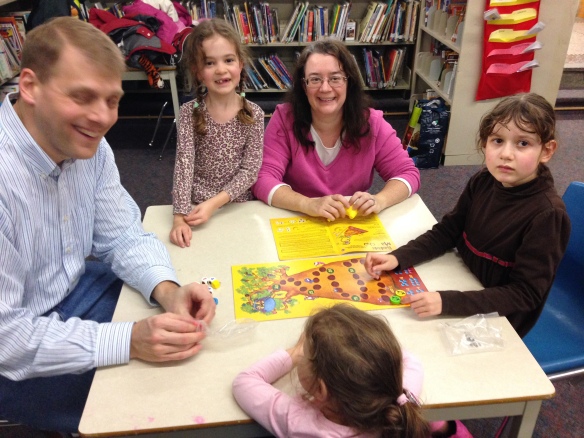 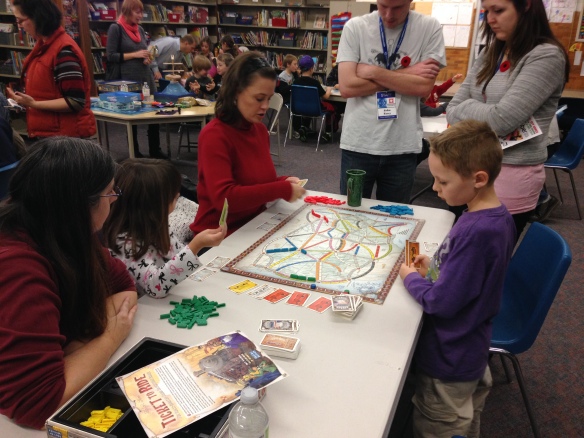 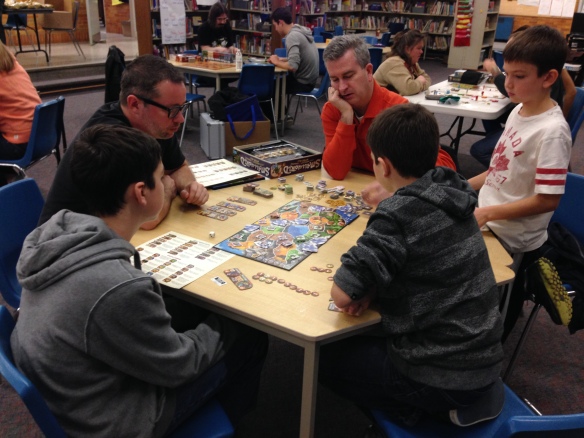 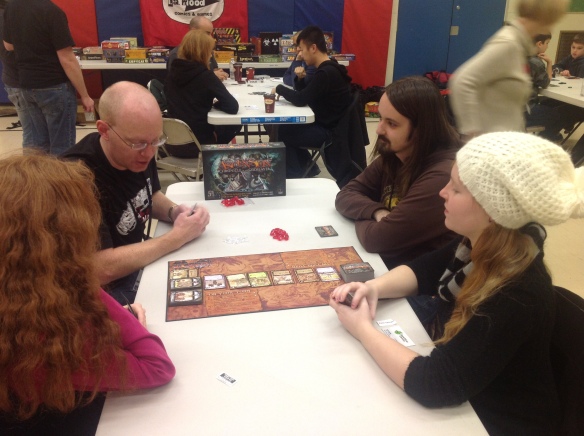 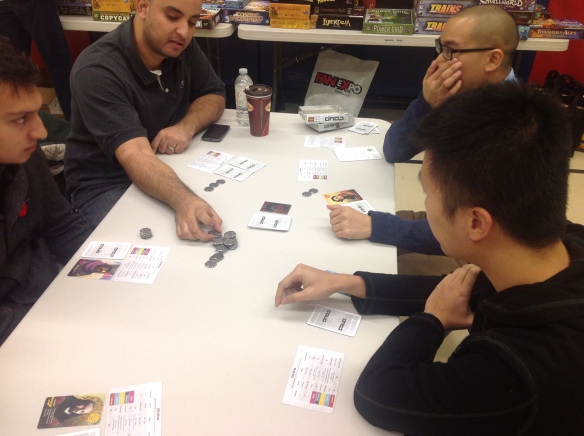 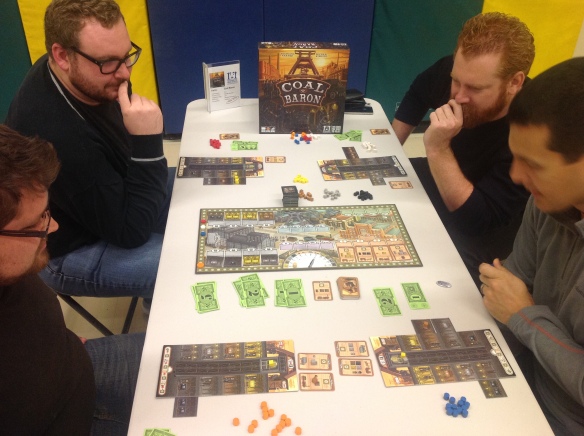 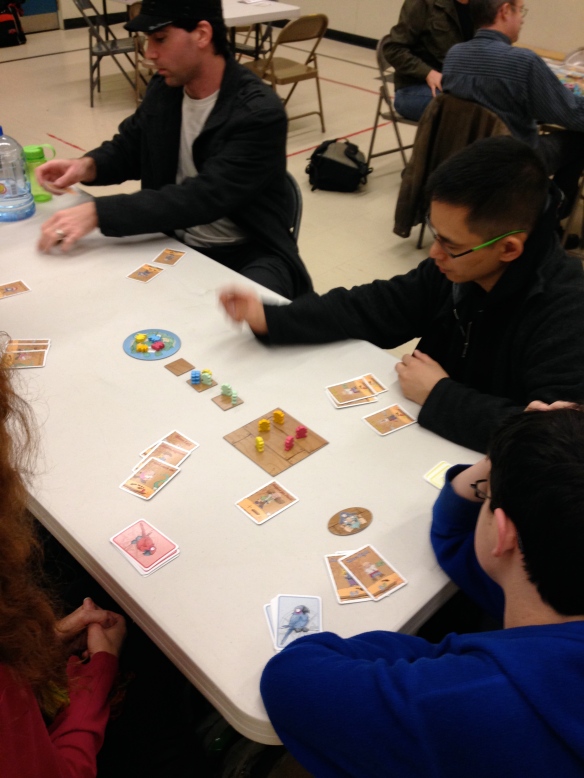 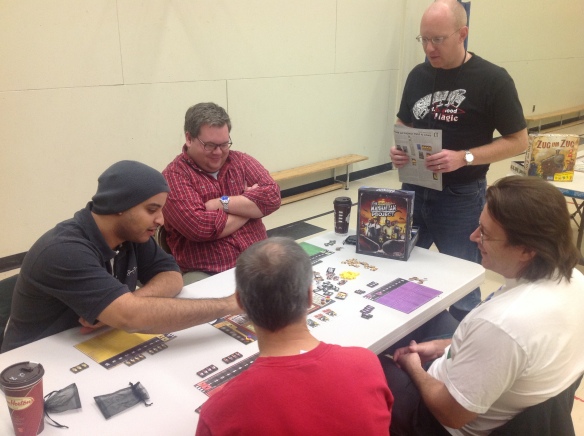 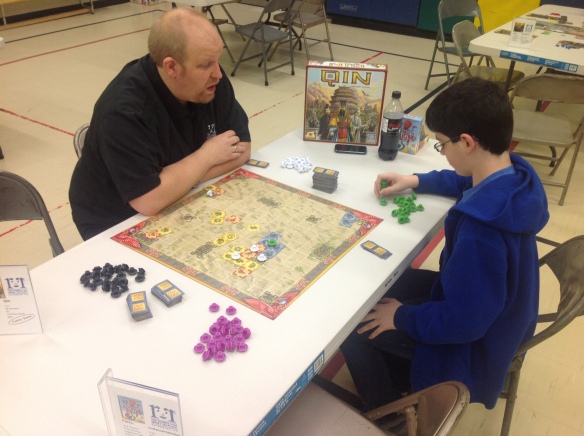 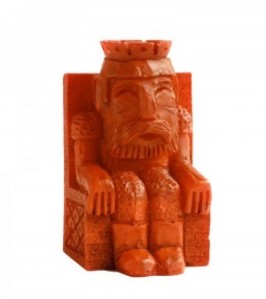 1) Josh Bricker from Flux Capacity – a new publisher that has successfully launched Give it to the King on Kickstarter this past August.
2) Mark MacKinnon from Dyskami – another new publisher that has his first successful Kickstarter game ready to hit retail soon: Upon a Fable.
3) Doc and Kevin from Mercury Games – I’ve pitched to them twice before – and the first game they published was from one of my pitches – Quarrantine designed by Mark Klassen. So we had history together!
Since there were only three publishers, but multiple designers that wanted to pitch game ideas, we decided that it would be better if the designers each claimed a table and then have the publishers go from table to table. This was interesting to us as we’ve never been able to pitch like this before!! 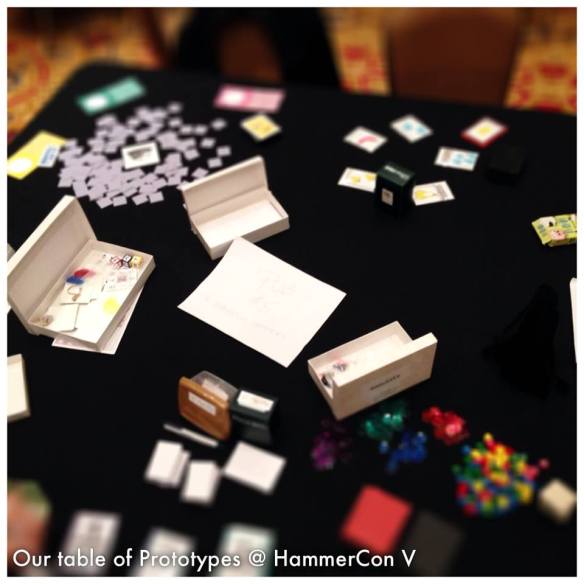 The big benefit to us was that we could pre-set up each game to make it easier to show all of our games. This was good because we didn’t follow our own advice and we didn’t have any of our sales sheets ready in time for this event!! Yikes! We had eight games that we wanted to pitch so we laid them all out – each ready to start playing immediately.  We put two tables together and sorted our games into similar types of games:
When a publisher came around for our 15 minute slot, we welcomed them and got right to business (we had met them prior to this actual pitch session). I showed them how our games were arranged and asked them which game or games that they’d like to hear our pitch or play a sample round.
An now, for the first time ever – you can actually watch me pitching SimpliCITY to Josh Bricker! You’ll note that I’m not using sales sheets – and that’s because of the fact that we had publishers come around to our table instead of us going to them. Check it out:
All three publishers were impressed at the variety and quality of our games – or so they said! 🙂 They were all interested in SimpliCITY and Clunatics and each of them wanted to come back afterwards to play one of our games. Nice!
Here’s where you shouldn’t do what Sen and Jay did – play your game with a potentially interested publisher with untested tweaks to your game!!! We had playtested SimpliCITY the night before and while everything worked out fine, we had one idea from Al Leduc to get rid of the score tracks. We brainstormed it and thought it was such a great idea that we implemented it right away. It was pretty crazy since it could have backfired on us. Fortunately it didn’t and each playtest went very well. We did manage to tweak it once more before playtesting it with another publisher which made it even better!
In the end, Josh from Flux Capacity expressed interest in taking another look at the game. We’re talking with him now to figure out if it will be at another convention or if we’ll simply mail him a copy of the game. I’m excited to show him a couple of the improvements we’ve made since he’s played it. It’s funny – the game was ready to be pitched when we brought it – but when you’re surrounded by game designers, there’s bound to be some good ideas floating around that might throw a monkey wrench in your plans!
Mark from Dyskami liked Clunatics and wanted to take a copy with him back to his playtest group! Huzzah!
So in the end we have publsihers interested in two of our games – nice! All in all, the weekend was fantastic. The time went by so fast though and I didn’t get enough time to playtest all the games that I wanted to try. Next time…next time!

Sen and I recently attended ProtoSpiel North in Hamilton, ON where we got to playtest some of our games, playtest some other designers’ games and also pitch our games to some publishers that were present. ProtoSpiel is an event that started in Ann Arbor, MI where designers would get together to playtest each others’ games – and for three years now, Hammercon – a board gaming event in Hamilton, ON – has been holding ProtoSpiel North with the same intentions.
There were many Game Artisans of Canada in attendance from all over Ontario, which is great for many reasons:
I’m going to break this down into three topics:
Playtesting our games
What’s That: Sen and I partnered up with Stefan Alexander and have been working on a party game the requires an App. Stefan is a programmer and has been able to program the app, and we’ve been tweaking it over the past few months. This is the game that I actually pitched to Repos Productions at the Gathering back in April – but we still haven’t handed it over fully as we’re not happy with the App yet. 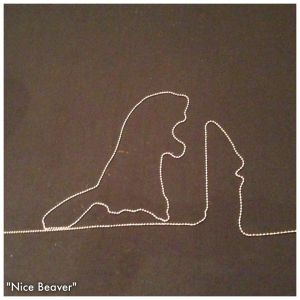 The game involves players individually looking at the smart phone and their own unique clue, and then everyone has to make their clue out of an artisitic medium. Then players cooperatively try to guess what everything has in common.
Our latest playtest was very rewarding. We found out that it is indeed fun and that it creates a lot of laughs, and we learned that we need to do three things to make it all work: 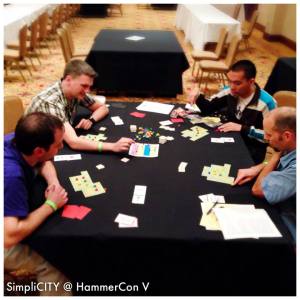 SimpliCITY: Sen and I were very happy with where the game was at – but after one playtest on the Friday night, one of the other playtesters gave us an idea that sounded awesome! The idea was to remove the very fiddly tracks that kept track of what players built, and instead resolve the effect more immediately. After brainstorming we realized that we couldn’t do everything immediately, but we could do it for some of the tracks. We woke up early on Saturday morning and changed some cards and found some tokens just in time for pitching it to publishers!! I’ll get more into this crazy plan in my next post!
Rock, Paper, Wizards: Sen and I have partnered up with Belfort artist – and game designer of Wasabi and other games coming soon – Josh Cappel – to make Rock, Paper, Wizards. We had pitched this game to Z-Man games at the Gathering in April and Zev really liked it and took it back with him to assess with his playtesters. A month or so later and we get some notes from them saying that they don’t want to give the prototype back to us yet, but they also don’t want to publish it as is yet. They gave us some feedback on some things that they’d like us to fix.
Since then, the three of us have tried so many different variations that tried to fix it, but we always ended back where we started. It has been one of the most frustrating games for us – mostly because it always felt like we were so close to something really good.
We learned that a game with guessing whether someone is bluffing or not – that players need two things: motivation on who to attack and information about some of the cards so they can have some odds on whether someone is bluffing or not. 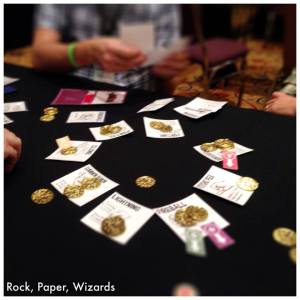 It’s rare that the three of us are in the same room, so we spent a good deal of time brainstorming ideas on how to fix this idea. One of the ideas from Josh was something as simple as “What if the spells we’re casting always hit their target?” At first it was dismissed since that would entirely remove the bluffing element altogether – but later on we thought more about it and realized that the fun part of the game is throwing hand gestures at each other – not the bluffing. We were so locked into the game being a bluffing game that we forgot our own advice: follow the fun!
So we brainstormed our new idea and quickly came up with some motivations and parameters. A quick playtest later in the week proved that we were on the right track! I’ve playtested it a few more times and am very excited with the direction the game is taking!
It was great to playtest these games with other designers. We got some great feedback and we’re excited about each of these games now more than ever!
2) Playtesting other designers’ games
I like to think I spend more time playtesting other peoples’ games rather than my own at these kinds of conventions. I got to playtest these games: 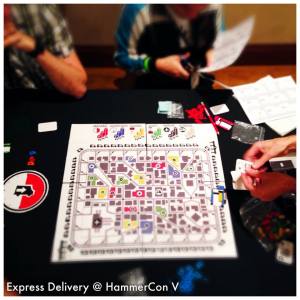 –Express Delivery by Yves Tourigny and Al Leduc – an interesting fed-ex kind of pick-up-and-deliver game
–Tip Top Towers by Daniel Rocchi – a cool balancing block game played on a wobbly plate
–Wild West Poker game by Francios Valentyne (can’t remember exact title!)- a very thematic Wild West deck building game in which all fights are done with poker hands
–Superhero co-op game by Mark McKinnon – a game where superheroes are trying to save aliens from planets that are getting sucked into a vortex 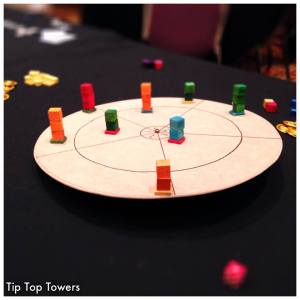 –Rescue Rockets by Josh Cappel – a flicking game that should get published! You play on any table and use things on the table as obstacles in an effort to rescue astronauts from planets – very neat!
–8-bit Bomber by Daniel Rocchi and Daryl Chow – a Bomberman kind of game with a cool puzzley movement mechanic that is fun and interesting
–Londonderry by Daryl Andrews and Stephen Sauer – Daryl asked if I could be his wingman during the play session of this game with Mercury. It was great playing with Doc and Kevin from Mercury! Not only have I pitched games to them twice before, but I’ve even played a game of Keyflower with them at the Gathering this year. It was fun to play a game with them again! You know you’re in a publisher’s good books when you’re both smack talking each other throughout a game! It was a great play session and they expressed some serious interest in the game. 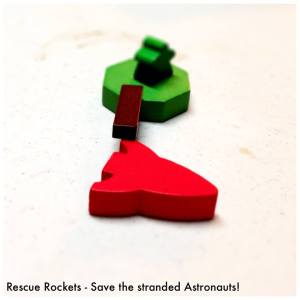 It’s always interesting playtesting other designers’ games as you can see how that person thinks and how they try to balance aspects of the game, or come up with solutions to problems that Sen and I have also encountered. I’ve always said that if you are a game designer – then surround yourself with other game designers!! You learn so much – even if you just playtest their games all the time.
In our next post I’ll share how we pitched our games to the publishers that were there, including sharing a video of one of our pitch sessions!
-Jay Cormier