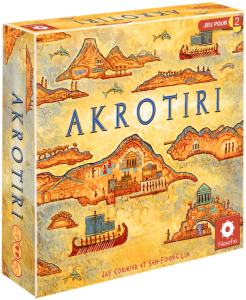 I’m hoping this will be the first of many reviews for our new 2-player Euro game, Akrotiri. The game kind of snuck into stores over the holidays and there hasn’t been much fanfare for it … yet..?!

Here’s hoping more reviews will pop up online soon! For now you can read this review from BGG user, Blue Alien. 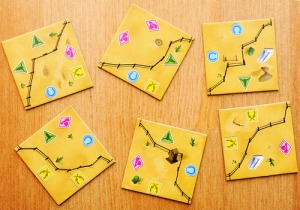 Here’s a new review of our game with the longest name: This Town Ain’t Big Enough for the 2-4 of Us (I really need to create a shortcut so I don’t have to keep typing that!). The review is from the website, Daily Worker Placement.

“you don’t need hours to have an awesome experience”

“This game is pretty great”

“when you have 10-15 minutes to spare this micro game will fill it will some old west fun!”

Thanks for the great review!

This is a bit of an older post, but with Akrotiri now hitting store shelves, we thought we’d run it again. It’s a wonderful review of Akrotiri by the Daily Worker Placement website. Here are some excerpts:

“I can’t stop thinking about it”

“I can’t wait for it to be released later this year, as I’ll be picking up a copy straight away”

“keep the game fresh for a long time to come”

You can read the entire review here. Thanks Adam and The Daily Worker Placement!

That’s right – our hit 2-player game that the entire world* has been waiting for is now available to purchase from Coolstuffinc.com! Soon it will be popping up on all online board game stores – and soon it will be in actual stores around the world!! Pretty exciting – and good timing too, what with Christmas coming up and presents needing to be bought for your game-loving loved ones…!!

Get your copy here and be the first person in your hood to have a copy of the coveted 2-player game from Z-Man Games …. AKROTIRI!!!

*might be a smaller subset of the entire population of the world.

OK, maybe a bit misleading – but it is true…if your name is Joseph Peterson at least. Joseph created a top 100 list of the games he’s played this year and Train of Thought is his #4 favourite game! It’s great to see that this game is still entertaining some folks out there! Thanks for playing Joseph! Everyone else can still pick this game up from Amazon (for just $10!) or their friendly local board game store!

Here’s what Joseph had to say:

Train of Thought is a party word game in which players take turns trying to get opponents to guess a particular word. They’re limited however to being able to give only a 3 word clue – and one of those words must be from a prior answer. For each clue given, each player may make 1 guess. If none are correct, the clue-giver creates another clue, using one of the guesses and up to 2 other words.

This one is a laugh riot! There are so many stories I could tell about this one, but my favorite has to be during these clues: “Horse but smaller” “PONY!” “Pony but smaller” “CHILD?” “No not child”. We had to stop the timer because we lost it. This is hands-down my favorite party game that I’ve ever played and one that I can only imagine will see more and more playtime as the years go by.

There are just over 40 copies of This Town Ain’t Big Enough for the 2-4 of Us available from online retailer (and one of my favourite places to get prototyping bits) – Meeple Source!

Just in time for the holidays, this tiny game makes a GREAT stocking stuffer!