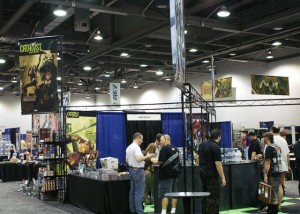 For any publisher that you don’t already have a meeting set up in advance (see Step 20), it’s time to approach the publisher – or at least someone who’s working in the publisher’s booth!  My approach is always with a smile and sounds something like this:

“Hi, I’m a game designer and was wondering if you’re looking at submissions while you’re here?”

If you’re not speaking to the right person then you’ll be told who to speak to, but otherwise this approach has served me well.

At this point I usually get a vibe of disappointment from some publishers as I’m not a potential customer to them.  Imagine how many designs a publisher sees in a year/month/week.  How many of those are awesome?  So you can see why a publisher doesn’t always have high hopes when a designer approaches them at a convention.  That said, a lot of publishers have told me that they only look at new designs at conventions, so it’s not all doom and gloom!

The response you get from a publisher at this point will be one of the following:

d)     We’re not accepting any outside submissions at this time

If you get ‘d’ then make a note and move on. If the convention lasts a few days and there are a ton of publishers at the convention then it’s quite possible you’ll forget which ones you’ve talked to by the end.

If you get ‘c’ then you’ve got a contact and it will give you an in when you do email them the week after the convention.  Make sure you get the name of the person you spoke to in person at the convention so you can say that you were talking to Susan at the convention and she referred me to you.  Makes it sound less like a cold call.

If you get ‘a’ or’b’ then you’re in luck.  The first thing I do is I let them know that I have many games but I have selected a couple that would really fit well with their company.  I said this to Atlas Games at a convention once and the rep at the booth was so thankful that I wasn’t about to show her 10 different games.  This made me think that a lot of designers had been showing her tons of games throughout this convention – and that some of them weren’t a good fit for her company.  Atlas Games had games like Beer Money and Gloom and we thought our game about collecting geeky things like comics, figures and movies would appeal to them. She appreciated that we knew her business.

As I’m saying this I bring out my sales sheets (see Step 14) and begin showing the ones that fit this publisher.  I have often noticed that the attitude of the publisher changes immediately once they see my sales sheets for my games.  It’s as if they realized they were speaking to a professional designer instead of some jimmy-jo-jo designer who’s invented a really cool monopoly clone.

Now it’s time for the elevator pitch (Step 16)!  This is it – this is what we’ve been leading up to.  Hopefully you’ve practiced saying this out loud quite a few times already so it will come naturally when you say it to a publisher.  While you’re saying your pitch you can use your sales sheet as a visual aid.  Point out the specific components and highlight what makes the game unique. The end of every pitch at a convention should be an invitation to try out the prototype – because you have it with you.

Check out the next blog post which will be about showcasing your prototype to a publisher – the Do’s and Do Not’s!

See how it all comes together? As I alluded to in our last post, there’s not a whole lot of luck about how we got published. It’s about setting a course of action and executing your plan.

You know how there’s that saying about first impressions? Well, it’s true. You need to make a good one with each and every publisher you meet, especially if you hope to be in this business for a long time – it’s a small community and you’ll end up seeing the same people over and over if you go to multiple conventions. So make sure that you present yourself well – professional, considerate, and well-groomed. A little bit of effort in this department can go a long way. Publishers need to have confidence in not only your game, but in you as a designer.

This means knowing your target audience so that you only pitch appropriate games to specific publisher. It means knowing how to take “no” or “not interested” for an answer. It also means having your act together – quite literally!

Jay and I will often role play pitching our games to a publisher to help Jay get his “patter” down. As a sales person, an actor and a street magician, Jay’s patter is strong, but even a vet like him gets nervous from time to time. He needs to prepare his responses to questions like “Why aren’t there more dice in this game?” or comments like “This looks like the same game as Knizia’s last one.” It sounds silly, but rehearsing helps immensely. It helps with flow, timing, and hitting all the key points. In fact, some of the times, we come up with things that we end up including on our sales sheets because they are excellent points to highlight!

Speaking of the sales sheets, what you’re actually aiming for is to be able to use a combination of everything we’ve talked about before – your pitches and your sale sheets – to interest a publisher so much in the idea that they want to see the prototype. You need to be able to tell a prospective publisher nearly everything about a game without even bringing the game out on the table. Why? Because in a crowded convention hall there may not be the opportunity to play the game right there and then. So use words and pictures to get the idea across strongly enough that a publisher will want to playtest the game. This can mean setting an appointment for a later date, giving the prototype to the publisher for them to take back with them, or mailing it to their head office in Germany.

Designing an awesome game is all well and good but if you can’t sell it to a publisher it’ll just sit on the shelf. You need to sell yourself as well as your product. So polish up that silver tongue and make some snappy sales sheets because no one wants to be a Jimmy-Jo-Jo (Not even Jimmy-Jo-Jo!)

3 thoughts on “Step 23: Getting your game in front of a publisher at a convention: Approaching the publisher”