Wow – this is it! The last few hours of the Kickstarter campaign for Belfort: The Expansion Expansion! If you haven’t pulled the trigger yet – well, now’s the time! We’ve already hit our target – but if we get to $35,000 then everyone will get a comic set in the world of Belfort and written by myself and my writing partner, Tim Reinert. You can actually read the comic online, but the only way to get your free physical copy is through this Kickstarter campaign. I’m really hoping we make it as I love the story we came up with and I love the art! We found an artist by the name of Rob Lundy and we paid him out of our own pocket for the art. We got permission from Tasty Minstrel Games to do it and they were cool with it. And they liked the comic as well! So much so that they actually hired Rob to do the art for their Ridiculously successful Dungeon Roll game!

So without further ado, here are some links:

Check out the comic

Check out the Kickstarter campaign.

Thanks to everyone that supported this campaign! Can’t wait for you all to try the expansion! 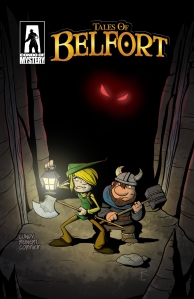 In addition to designing games, I’ve also been trying my hand at writing comics with my writing partner, Tim Reinert. Our first story is called, Tales of Belfort: The Greatest Story in the History of Ever, and other lies I told my mother. It’s a 10 page story that is now fully available for free online – right now! For those that have played the game of Belfort before and have wondered why it takes an Elf AND a Dwarf to go to the mines to get metal…well, here’s your answer!

Background: When Tim and I first decided we’d like to write comics together we started having brainstorming sessions on a huge opus – a gigantic epic – that would have spanned 30-40 issues. We had (and still have, I guess) some great ideas and concepts, but found ourselves drowning in our own ambition. Instead of calling it quits, we came up with a new strategy – let’s just tell a one issue story about something else!

So we worked on an idea or two and still found it to be quite a handful, since neither of us have written a comic book before – though we both have extensive, and varied, experiences in reading them. Our third plan was to write short story comics that are 5-10 pages long. As soon as we did this, the pressure was off and we were able to easily write 3 or 4 scripts.

Then came an idea. What if we wrote a story set in the world of the soon-to-be-published game of Belfort. Even suggesting it to Tim made me cringe as comics based on…anything, usually aren’t that good. Still, we gave it a fair shake and tossed some ideas around. Once I explained some of the concepts of the game to Tim, we found a really cool story idea with the pairing of and Elf and Dwarf forced to team up and go the mines to bring back some metal. With this idea in place, we wrote our story (and re-wrote and tweaked and re-wrote some more).

Once this was completed we then set out to find an artist. We knew we’d have to pay out of our own pocket for this comic, and it was an expense that we thought would be worth it. Our first thought was to reach out to anyone we knew that could draw. We didn’t know that many people apparently. Then we checked online artist resource sites and got some ideas – but before contacting anyone, I remembered I had a cousin that works in animation in Ottawa. Some discussions later, he recommended Rob Lundy who was also a big board game fan.

Rob saw some art from the game and read our script then showed us some concept sketches. Tim and I were immediately impressed and were continued to be impressed as he started to provide layouts and then completed pages – with colour! It was definitely way better than we were hoping for our first comic!

Since working with each other seemed to be mutually beneficial, we decided to team up and we formed a website called Condo of Mystery. Our plan is to release a new page every week. Since we’ve launched in late October, we’ve done just that. Now that we’re done this story you’ll be seeing our second comic start up soon. Our future comics will be different genres and even different art styles – even though all the art is done by Rob.

So, check it out, bookmark it for later and enjoy our first completed comic: Tales of Belfort.

Board games aren’t my only passion. I am also enamoured with comic books.

So much so, that I partnered up with fellow comic book aficionado, Tim Reinert (whose blog about comics and movies is amazing, btw), and we started to write our own comic books! 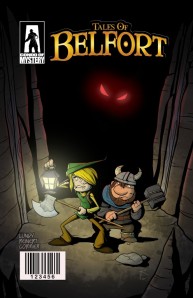 We have written about half a dozen short stories so far and the first one that we wanted to pursue also had another motivation for me: it’s set in the world of Belfort! Initially, Tim and I were a bit concerned because we didn’t want to make it seem like a cheap tie-in, like so many ‘anything based on anything else’ can often be.

Once we stumbled upon the conceit, we were excited to tell this story. If you’ve played the game and wondered why it takes an Elf AND a Dwarf to get metal from the mine, well, here’s your answer!  We wrote a buddy/cop story, where neither character is a cop! Once we got the thumbs up from our publisher, Tasty Minstrel Games, we wrote what we think is a pretty solid adventure story!

Our biggest challenge was finding an artist. But like any line of work, it’s often not ‘what you know’ but ‘who you know’.  I have a cousin in the animation field who hooked us up with Rob Lundy, an illustrator from Ottawa – we were ridiculously impressed with his work. Once we got through this first comic, we realized that we all liked working with each other so the three of us started a website called the Condo of Mystery.

We plan on releasing a new page every week on the site.  The first 10 weeks will be the Tales of Belfort comic. Following that, we’ll get into some other stories that vary in genres from Noir to Western to Superhero.

Check out the site and view the Tales of Belfort comic by choosing it from the header and selecting Page 1. Please subscribe to it so you can be informed of when new pages are posted! This is an exciting venture for the three of us – Tim, Rob, and myself – even moreso for me since the premiere adventure is set in the world of Belfort!