You can read the full story in our Akrotiri Designer Diary Part 1!

Our first player aid came about 5 iterations in since we didn’t need them before this point. In this version players could have multiple ships! This stayed in the game for awhile, until we realized that you can move so fast in this game that multiple ships weren’t really needed. We had huts which were a way of claiming islands – but they didn’t have to be located like temples are now – you simply sailed to an island and built a hut!

The market was more of a stock market concept where players could affect the price of each good. It took us awhile to figure out the current market as we were toying with other market mechanics.

Pirates! We had pirates! You could move a pirate ship for an action and it did various things throughout the development…I think they could block you from even moving into a certain area – or they would steal resources from your ship! This version of the game was all about shipping resources – that’s it – so pirates were a way of creating some tension. 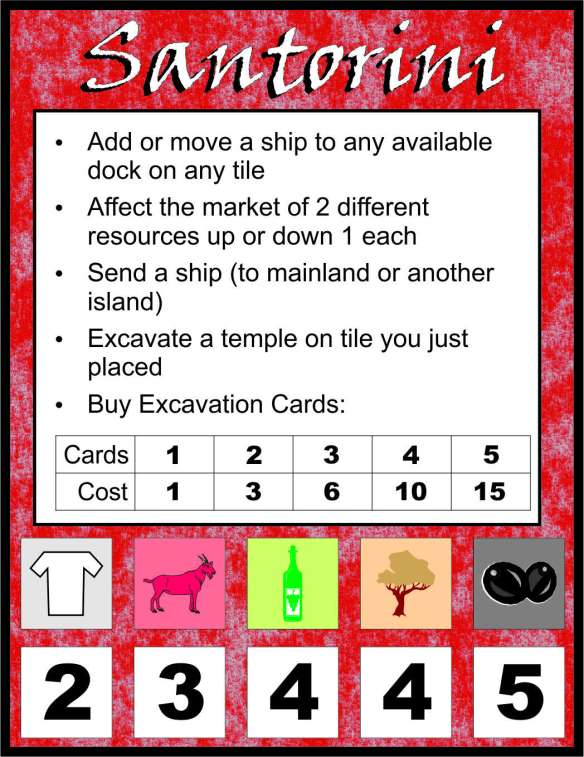 This is where we implemented the temples! They started off pretty easy – like “East of 2 Mountains”. Apparently we allowed people to buy a lot of map cards as well! Makes sense that we reduced that to a maximum of 3 in the final game! The market was still a stock market style system.

1) We tried different capacities for shipping. You could upgrade your boat so that it could hold more resources. It’s not a bad idea but meant more components since they’d physically have to actually hold that many resources!

2) You could place a flag on an island! Weird. You got points for flags on contiguous islands – but you couldn’t place a flag on islands with your opponent’s flag. This did add an element of interaction as you’d be racing to get to specific areas before opponents so you wouldn’t be blocked off. Then you were motivated to place your tiles in your area more to make more islands…so by the end it actually did the opposite of interaction since each player was in their own sector of the map.

Things we added that stuck: Gaining more actions based on the number of temples you’ve found. While the number of actions changed through each iteration – the concept stuck! It really motivated people to build temples fast! But once you got one or two – it was tricky timing when you should find a harder temple – and that decision still remains in the game.

In this iteration we gave bonus points for temples that were built further away from the main island of Santorini (Thera in the final game). The idea is interesting and it made it into the final game but only as goal cards.

Wow – looks like we had a lot of temples in this version! Interesting that the actions go up and then back down. That was our idea of a negative feedback loop (catch-up mechanic) as you had to time it right when you wanted to build those last few temples. Ultimately we found it anti-climactic and had it only increasing in actions.

Another stab at doing the market. This time each player would have a token for each resource and would place it on their own player aid. I can’t remember how players would impact their own market – but since it was individual, it just didn’t work.

You can see some things starting to take fruition – like how to excavate temples. That’s exactly how it is in the final game – except that now you can excavate on any tile, not just the one you placed.

The Worshippers were the same things as the flags in the previous versions. A way to get other points.

This one added back the bonus for finding temples further away from Santorini as well as the flags/worshipper bonus. The star at the end of the Actions track meant the game was over.

The game has now changed from Santorini to Akrotiri! We saw that there was already a game on BGG called Santorini so we changed it to Akrotiri – which is an archaeological dig site on the island of Santorini.

New things in this iteration:

1) Added the pre-turn actions to the player aid: add a tile and place 2 resources.

3) Atlantis! What?! Yeah we added this whole other element of Atlantis. Many people believe that the volcano that erupted that created the island of Santorini also sunk Atlantis! So we thought we’d use that in our game. Basically in this first version of having Atlantis in the game you just used one of your map cards – but you paid 12 gold and it only gave you 3 points – but it ended the game. Atlantis will stick around for a few more iterations…!

Check this out! Now we’ve got a pretty fancy player aid! Everything has been turned into a graphic or an icon! Pretty sweet!

1) Pick a role? Yeah we had these different role cards that gave bonuses and made certain things easier. You would choose a new one each turn.

2) The actions are very close to the final version of the game. There’s no oracle yet (that was one of the roles!) and maps cost 2 gold each instead of being able to buy more for one action at a higher price.

3) Game ended when Atlantis was found or one player found 7 temples and 5 gold gave players a point at the end.

This is the version that was first pitched to Z-Man at BGG.con in November 2010. This one had Atlantis still but now you had to find rumours in order to locate Atlantis! Whenever any player every found a temple, they would take a random rumour token and place it face down on top of the temple. Then any other player could go to their island and pay the owner of that temple some gold and get the rumour token. That player would place the rumour token face up on one of the ordinates on their player aid around Atlantis. The rumour token would have terrain icons on them and once you got a rumour token on all 4 ordinates (N,E,W,S) then you had a map to where Atlantis was located! Whew – crazy! Also the Oracle makes an appearance! It even took more actions to use the Oracle the further you were along – which seemed fair!

We also implemented the concept that your actions per turn only increased.

This version had something called Offerings and for the life of me, I can’t recall what that was about! It seems like it was something about rumour tokens. Yeah – you would get more money for each successive rumour that someone bought off of you. This meant players tried to find rumours from players that hadn’t ‘sold’ many yet. We also tweaked how many actions you could get per turn.The end game gave 1 point for each 10 gold – which is how it is in the final game.

OK bye bye Atlantis. Maybe we’ll see you in an expansion one day! We had received feedback from a different publisher that the Atlantis part felt tacked on – which it really was – so we removed it. We added the ability to buy more map cards for one action at a higher price. This is pretty close to the final player aid. We even added the free actions on this one.

The one change that was made after this was to make it a two player game and to add more goal cards to some of the action spaces.

So that’s it! A tour of how a game came to be, as seen through the perspective of the player aid!