Found another interesting list on boardgamegeek today.  This one shows the sales of over 200 board games including uber-popular ones like Monopoly and Yahtzee.  I was surprised to see how high some sales were and how low other sales were.  I see that many of the stats are out of date – but they still are a good indicator.  Follow this link to check out the list. 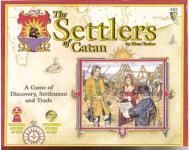 While Monopoly boggles the brain with its sales of over 275 million units, one of my favourite games, Entdecker, has sold only 25,000.  There’s a direct correlation between the complexity of the game and its sales – with most of the top sellers being party or family games.  There are some exceptions of course, as Settlers of Catan as sold over 15 million units – with an interesting side note that Mayfair plans to sell one million a year in the near future.

So while there are the few breakouts, they are few and far between.  Hopefully this will answer the question I get from people when they find out I design board games: “Oh, are you going to be rich soon?”

I participated in a lengthy conversation with Tom Lehman and the Tasty Minstrel gang.  They had just finished playing Eminent Domain and Tom was providing his feedback.  Tom is a game designer with such credits as Race for the Galaxy and the expansion for Pandemic, On the Brink.  It was fascinating being part of this conversation as Tom has so much experience with not just designing games, but with how to make it more accessible and how to grow it as a brand as he’s helped with developing the Dominion series.

Tom’s biggest feedback was about scalability.  He had some comments that made me think differently about some of our games.  The game might play perfectly today – but if it were to become a big hit, what would the expansion include?  If it includes new powers or cards – how will that impact the game?  It seems easy and obvious at first, but when Tom dug deeper he made me realize that there’s more to it than I first thought.

In Eminent Domain, when players play Research cards they can look through an 8 card tech deck.  While it can be overwhelming to a newbie to look through these 8 cards, experienced players will not have any issues.  However, if an expansion were to add 4, 8 or 24 new tech cards – then what would be the mechanism for choosing cards then?  Can they look through all 24 tech cards to find the card they want?  Would a rule have to be added that a player can only look through a certain amount of tech cards – or should that be taken into consideration now for the base game?  It was very interesting to chat game design concepts with an experienced veteran of the industry.

I got to see a bunch of other designer’s prototypes as well, like Seth’s Wizard’s Tower or Jonathon’s spinner game about space exploration, or a game that was based on those castle-defending type of online flash games.  Seth’s Wizard’s Tower game was an interesting though abstract area control game; Jonathon’s spinner idea was brilliant but I’d love to see it in a way more simplified game; and the castle defence game was a lot of fun that was just missing some balance issues.  It was interesting to be surrounded by so many like-minded designers!

I had a lot of fun at BGG.con, but not just from what I’ve shared in my previous posts.  I met a lot of great people like Tim from Australia, Chris, Tim and the other Chris, David, Peter, Kimberly and Steve and many more that I can’t remember now!  We stayed up to 3am almost every night playing all sorts of games – from party games like Time’s Up and Spot It to silly games like Kackle Dackle (seriously a game where you catch slimy poo out of a dog’s bum!).  I even found one group of people playing Monopoly!  I’m not sure if that’s a statement on the level of quality of the current crops of games being released or not though.

I also really liked the Geek Chic furniture that was all over the main hallway.  Geek Chic is a company that makes the most amazing gaming tables I’ve ever seen.  The tables look like normal tables, but can be converted into these sunken gaming areas with removable plexiglass to place your board or map below, as well as fold down areas for each player to keep their pieces or secrets!  Very cool! If my place could accommodate it, I’d definitely want one of these tables! Check out more of their furniture here.

Overall this was a huge opportunity for Sen and me, and I think I made the most out of it!  I had a blast and would love to return next year!