Our second time being at Gen Con was full of hectic fun! I flew in on Wednesday night and got picked up by Sen, Jesse and Scott at the Indianapolis airport. We grabbed a bite to eat and then Sen and I got interviewed for Ludology! We were able to get our badges late in the evening since the check in was open 24 hours – smart! 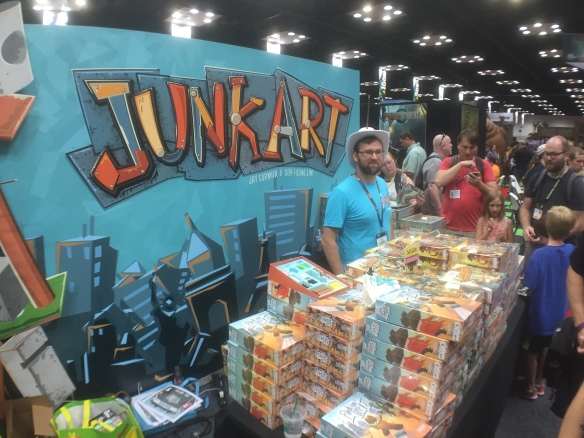 Every day we spent one hour at the Pretzel booth demoing Junk Art and one hour at the IDWGames booth demoing our new Godfather: A New Don game. While we’re extremely proud of both games, the presence of Junk Art was very impressive! They had a huge booth with 3 tables dedicated to demoing the game. All 3 tables had extra large versions of the game which certainly drew crowds throughout the entire 4 days. It was great demoing Godfather: A New Don as well as it reminded us how cool of a game it is! 🙂

One of our nights was spent with IDW Games where we were finally able to show them our Powers game. The game played very well and Nate from IDW caught me because I was too greedy! 🙂 We spent the rest of the night pitching other games to IDW Games with many of them generating interest! 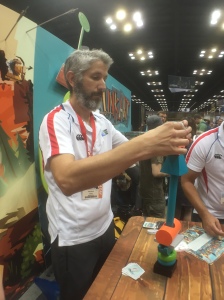 Matt Kindt winning at Junk Art! Years of illustrating comics must have given him a steady hand!

Another one of our nights was spent with our comic book hero – Matt Kindt! I love his Super Spy comic a ton as well as his Mind MGMT and we played Knit Wit and Imhoptep together and then spent a few hours brainstorming a project that we’re collaborating on together! So fun!

The rest of our waking hours was spent meeting with publishers and pitching them games. Here’s a high level summary of what went down:

Breaking Games – they had a mock up of our Clunatics game but we all want to tweak it a bit so we chatted about a game plan.

USAopoly – Daryl Andrews and I were working on a game that we specifically were making for them. It was still in development so it was just a sneak peek! They also liked a game I designed with Shad Miller called Skirmishes.

They were also interested in a party game that I came up with – the day before leaving for Gen Con! Crazy story! I came up with a game on Monday night in bed, then Tuesday I made the prototype and was able to test it Tuesday night. I had time left to tweak the prototype and then take it with me to Gen Con! Every publisher I showed it to expressed interest in this game! Grey Fox, Bellwether Games, Renegade Games and CSE Games all liked the game and one of them currently is looking into pricing and sourcing!

Pretzel Games already has our Junk Art but maybe they want more Bamboozle Brother love? We showed them our outdoor game, SimpliCITY and Rack Your Brain – and he expressed varied levels of interest for each of them.

Renegade Games is hot right now with Lanterns selling tons and Lotus looking to repeat that success. We have a game coming from them next year but we also really wanted them to check out our SimpliCITY. He took a prototype with him!

Marbles was there – not in a booth, but as a happy wanderer – and we were able to meet up with Tanya. She really liked our game, Lost For Words and showed a bit of interest in a game by Shad and me called Rack Your Brain. Then we showed her an alpha prototype of a single player game that would fit in the same kind of line of games like those Rush Hour games where you’re trying to slide cars around to get one of them out. Tanya was really taken by that game idea and she took a video of us demoing it. That has a high priority for us!

CSE Games was a lot of fun! Fabio has had a lot of success with the games he’s chosen to publish and we’ve only heard good things about working with him. He seemed genuinely excited by 4 of our games. Rack Your Brain seemed to be the most interesting since it would fit in with his high-selling Quartex line of games. He also liked Lost for Words, Word Bird and Draw Your Own Conclusions.

Repos Production is a publisher we’d really love to partner with as they always have high production quality and seem to really support their games a lot. He expressed interest in Skirmishes, as long as we can support a team play – which we know we can!

Bellwether Games liked Draw Your Own Conclusions and SimpliCITY – as well as Rack Your Brain. We’ve sent him rules for SimpliCITY.

On our way out we almost got to meet with Haba, but we couldn’t align schedules. We did get to meet with Upper Deck for 10 minutes and learned about the kind of games they’re looking for! Win!

So all in all, a fantastic time and very much worth going for me. While we know many of these publishers and could send them any game in the mail, the opportunity to pitch it live in person is 10 times more effective. If you’re a board game designer who’s starting to get into game design and has a couple of games ready to pitch, then attending a live convention like Gen Con is highly recommended. Remember to follow our steps for optimal success!

Cool! Bellwether Games has just posted an interview we did over a few email correspondences we had over the last couple of weeks. It’s a fun interview that goes into details about the games we have coming out this year as well as some of our design philosophies!