First of all, to be on the jury you need to be a journalist who writes reviews professionally for board games. Writing for a blog or a podcast doesn’t count either. It has to be for an established publication. Tom writes reviews for the equivalent of the NY Times for Switzerland (he said it out loud, but not in English!). The reviewer has to be 100% independent from the board game industry. They can’t even have any family members that make money from board games in any way. Finally, you need to publish in the German language in order to on the jury! Makes sense since the award originated in Germany and the rest of the jury all speak German.

He mentioned that while some people drop out of being a member of the jury over time, they will accept new members onto the jury as long as they meet the criteria and are then voted in by the other jury members.

Over the course of the year, a jury member has to be aware of pretty much every game that is released in Germany. To win the award the game needs to be released in Germany and have a German rule book. Still, this is over 500 games every year that they have to be aware of – AND play! Tom attends conventions like Essen Spiel and Nuremberg – but for him they aren’t the fun-time extravaganza that us gamers would have. Instead he spend 30 minutes at each booth that has a new game and has the new games explained to him. He does this over and over – for 4 days! I didn’t know this – but apparently there is a secret room at Essen full of just the new games that are being released! This is only open to the press and it makes it a lot easier for them to see all the games!

Tom has a location that is just for game playing – and storage! He has open invites to the public to come to this location and play games. He has 25-30 of these game nights per month! Whaaa! That sounds like heaven to me! 🙂 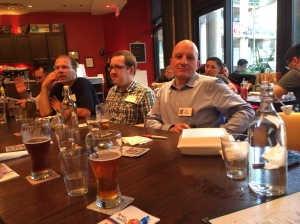 Tom Felber (right) at Pizza Ludica – a board game restaurant in Vancouver!

The members of the jury all have access to a private forum where they chat with each other and recommend games they’ve played throughout the year. In May though, each member must create a list of their top 15 games that they like. Then all the members of the Jury get together for a 4-5 day conference. They will play these 50-60 games together and then figure out a way to reduce that to a list of the top 15 games. They vote for each game and if they get more Yes than No – then it’s in.

However – they are also keen to include a wide variety of games in their recommended list. So they always try to include a party game, a 2-player game, an abstract game, a cheap game, an expensive game etc… So if they get to their top 15 but realize that they don’t have a party game yet – then they go back through their games and find a party game to add – and one of the other games to remove. Lots of ‘arguments’ can occur at this conference as some believe strongly in some games, while others might feel the opposite! They keep going until 100% of all members agree on the final list.

4. Play more games and the winner is chosen!

Now that the nominations have been announced, the jury members play only the nominated games for the next month and a half! Usually upwards of 50 times each! That’s insane!

Then it’s time for the day of the award. A couple hours before the actual televised (in Germany) ceremony, the members of the Jury get together and they vote on which game will win. So up until an hour or so before the award is given out – no one literally knows who will win the award! Wow!

So looking over this again you can see that Tom and other jury members play over 500 games a year and spend almost every day of the year playing games (which sounds awesome, but remember how many bad games there are out there too that they have to play!). And they do all this …. for FREE! That’s right – they earn no money from Spiel des Jahres for this. They are complete volunteers and are involved because they believe in the purpose of the Spiel des Jahres award – to increase awareness and acceptability of board gaming everywhere! That completely floored me.

But the Spiel des Jahres still has expenses – mostly in attending events and having some presence or awareness at events, or festivals. They get this by charging the publishers 2-3% of retail to place the Spiel des Jahres logo on their box. This is worth it for a publisher because a Spiel winner can expect a minimum of 200,000 sales in the first year after winning!

So there you have it – that’s what it’s like to be on the jury for the Spiel des Jahres. Very interesting stuff! Thanks Tom for the enlightening evening!