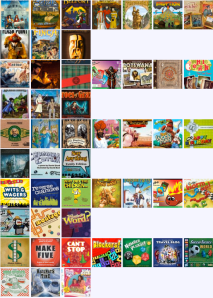 Ender Wiggins, who wrote 6 of the top 15 most viewed* board game reviews (Belfort’s review was the 8th most viewed review of 2011!),  made a list of his favourite games of the year. There are some amazing games in this list and anyone interested in checking out some new titles could hardly do better than those listed here. Oh, did I mention that Belfort is his third favourite strategy game of the year? 🙂 Huzzah!

In other Belfort related news, Belfort has just made it into the top 400 games of all time according to users on boardgamegeek.com. Wow, it’s just amazing to know that Belfort is entertaining so many people! Sen and I couldn’t be happier!

The final bit of Belfort news is that we’re one page away from completing our first Belfort comic! Catch up on it now and check back on Monday for the final page.

* it’s actually the reviews that got the most thumbs – which probably correlates to most viewed as well.