For those not in the know, Essen is not just a city in Germany, but it’s also synonymous with the world’s biggest board game convention. Also known as Spiel, Essen is attended by as many or possibly even more people than the San Diego Comicon! The amount of space this thing takes up is unbelievable: 12 Halls and each of them are many football fields in size. Almost every publisher will be there from all over the world, with many of them using Essen as a launch pad for their newest games. Essen is the place to get the latest and greatest games, that might not make Stateside for another 3-12 months. 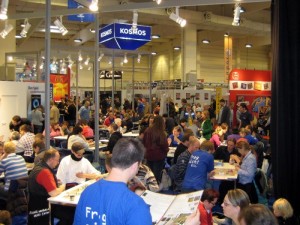 The primary reason I’m going though is as a designer and to meet up with publishers. Following Steps 18-22 of this blog, I’ve emailed them in advance, prepared, packed and am now ready for Steps 23-27: at the convention. I am bringing 6 games to show to publishers and have about a dozen meetings set up throughout the event. At the very least it will be a good opportunity to network and get my face/name out there.

The secondary reason I’m going is to try and find a European or Asian publisher for Train of Thought or Belfort. I’m bringing a copy of each (oh, did I mention that I just received my copies of Belfort?! Huzzah!).

The tertiary reason I’m going is to demo Belfort! I’ve already had some people email me with some requests to play it. Should be a good opportunity to get some awareness out while I’m there.

The great news is that I won’t be doing this alone. Three other members of the Game Artisans of Canada will also be coming, which will be great for networking and actually playing some games!

So my posts will be infrequent for a week or so, but then expect a flurry of posts as I regale the adventures I’ve had during my first trip to Essen.

2 thoughts on “Going to Essen!”