More art is coming in from the very talented Joshua Cappel!  I’m loving the attention to detail in these cards.  I also am really enjoying seeing how an artist who has a lot of experience in illustrating board games has come up with some great graphical representations for various aspects.  For example, the bottom of most cards are not able to be used until a player recruits a Gnome and places the Gnome on that card.  What Josh did here is create that lock symbol, visually indicating that a player cannot use that area – but once a Gnome (now pentagon shaped instead of star shaped, which fits as the board is also pentagon shaped!) is on it then the lock symbol is gone and therefore the ability is unlocked.  Beautiful!

Here is our prototype that Tasty Minstrel played and then the art provided by Josh.  This was the third draft of the cards that we saw from Josh as we had some minor tweaks for the first couple of drafts.  Some improvements were about making the resources more easily identifiable, having some more consistency with layout and some rule clarification.

It’s been an amazing collaboration and one I wasn’t fully expecting.  It’s been wonderful that Tasty Minstrel has kept us in the loop and allowed us to provide feedback throughout this process.  On one hand it’s tremendously exciting to see amazing looking art for a game we designed, and on the other hand we are able to catch anything that actually affects gameplay before it goes to print.  All in all – we are all very excited about these cards!!

Our Prototype Art for the Building Cards in Belfort: 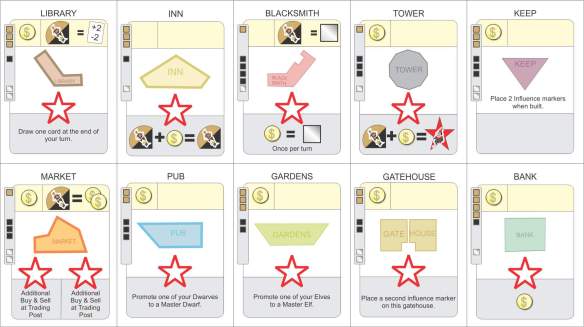